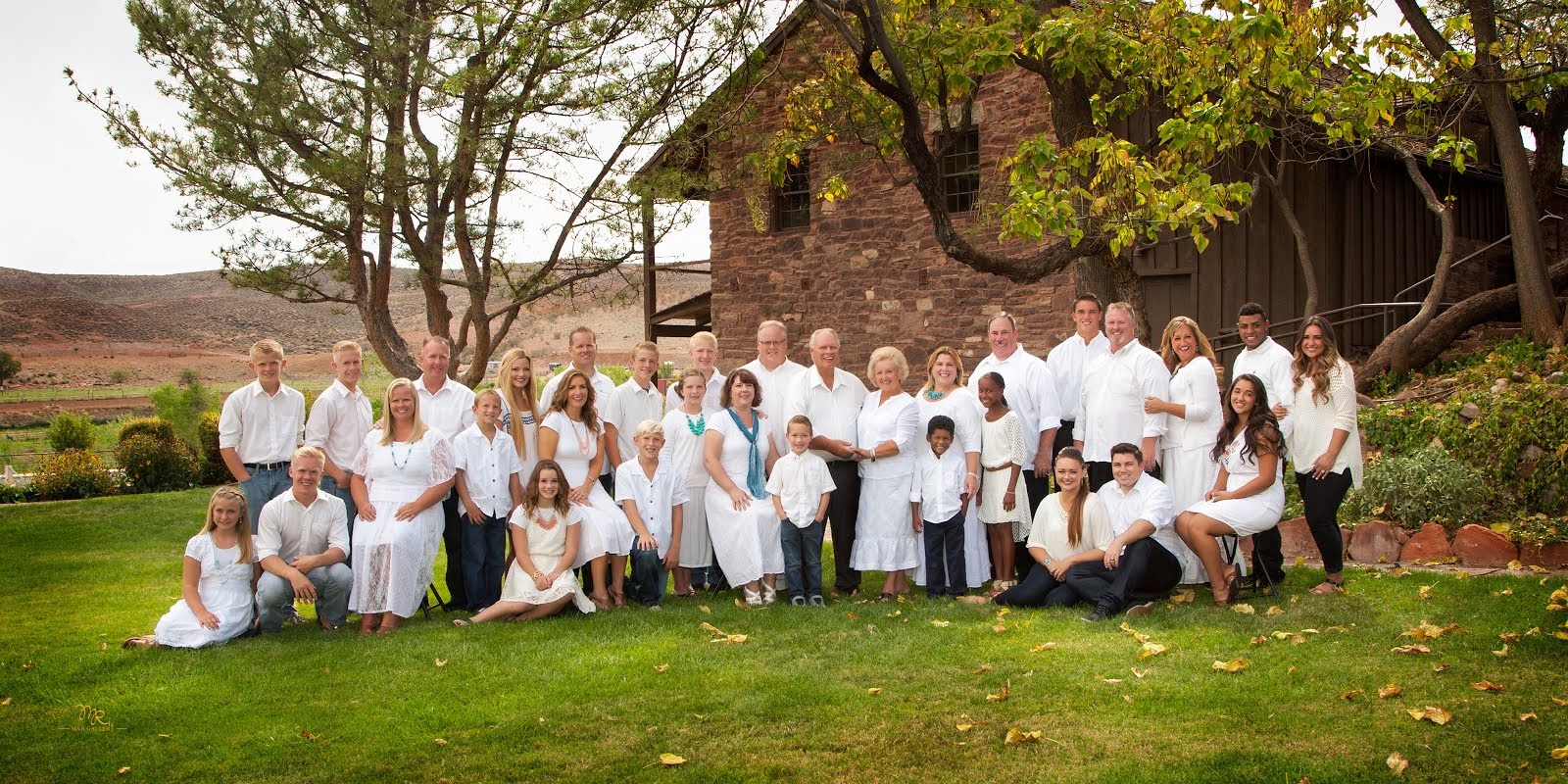 Too Long Since We Wrote
We had a lot of things happening since we last updated the blog.  President Gibbons was released.  President and Sister Gibbons are wonderful people and it was sad to see them go.  They will be going back to Texas

Our new mission president is Garth Hall from Rexburg, Idaho.  He was a successful college football coach at major universities through the country.  President Hall and Sister Hall are great. They have been making visits to each of the missionaries homes, getting tours at all of the historic sites, plus taking care of all of the mission business.  When they attended the Rendezvous play, where we preformed the Jed and Annie skit, they thought we did a very nice job on the stage.

We have been given a new assignment for Rendezvous from the Jed and Annie part to the Thomas and Elizabeth vignette.  So we have been learning and practicing the new part.  We are really getting out of our comfort zone with this part because we are required to sing a duet.  We have been getting some help from sister Cluff who has taught voice lessons at the university.  This has helped but until we actually preform we will be extremely nervous.  The new vignette is where Thomas explains to Elizabeth that they will be leaving Nauvoo sooner than they thought.  Instead of leaving in April they will be leaving in February (two weeks).  Elizabeth has some major concerns about leaving there comfortable home in the middle of winter!  Well learning the lines, blocking, and the song has been an extra challenge.

We have been called to be district leaders of the Joseph Smith Sr district.  We are joint leaders in this calling.  There are four couples in our district.  E/S Hopkin, E/S Taylor, E/S H. Skinner and us.
We have monthly/weekly assignments of: mission training meetings, Sacrament meetings, cleaning the statues, site boards, and cleaning the stake center.

We took part in the Nauvoo exodus.  We walked and marched from the Cultural Hall to the Mississippi River.  I participated as a member of  the Nauvoo Legion.  We both represented family names of Cheryl's relatives who lived in Nauvoo. Royal James and Harmon Cutler,  Margaret McCullough, and Susanna Barton.  This was a very special experience.  The weather was cold but not as cold as when the saints left Nauvoo. 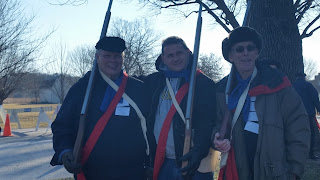 There was a nice program on the bank of the Mississippi.  The whole week was full of firesides and lectures regarding the various aspects of the exodus.  The events were held both in our visitors center and in the Community of Christ Visitors Center. People came from all over the country for this event. 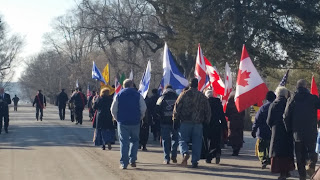 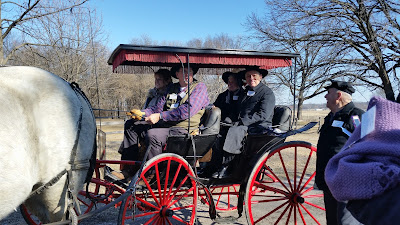 We walked from the Cultural Hall down Main
street to Parley Street then West on Parley
street to the Mississippi River.  A little over A
Mile.  All of the wagons and Buggy's  were in
operation for the Exodus.  President and
Sister Hall in the back of the buggy with E/S
Hall driving.

We had a special activity for Valentines Day because we were able to have a dance in the Cultural
Hall.  Being able to dance on the same floor as Joseph and Emma Smith as well as all of the early saints is a special memory.


Then the big one.  We have been reassigned to the Carthage Visitors Center.  I am no longer assigned to the Blacksmith shop as the asssistant site leader and Sister Horlacher was released as the assistant site leader from the Log School.  Now we get to work together at the Carthage Visitors Center, in Carthage, Illinois.  We were required to move to Carthage.  That meant deep cleaning our apartment for the E/S Blair who we replaced in Carthage.  We worked hard packing and cleaning. The Weather wasn't ideal because it snowed and was cold about 4 degrees.  We do a lot of comparing and think of the early saints and regardless of our challenges we are thankful for the blessings which we have and minor difficulties.  That evening we, along with other couples who have been assigned Carthage had a meeting with  President Hall regarding the upcoming peak season at Carthage.  Last year there were 61,000 guests touring the Jail.  I took a lot of notes as we are the assistant site leaders and will be the site leaders in a month.  We worked some of those busy days last summer so we have some idea what it will be like.  Its quite a challenge when you see 3 and 4 buses pull up first thing in the morning.  The challenge is to accomadate the guests and maintain the very special spirit which is in the jail.

Our move from our home in Nauvoo to Carthage became a challenge due to the cold and
snowy weather.  The 3 inches of snow along with the 4 degree temperture and the dense fog were all challenges. 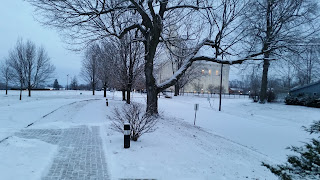 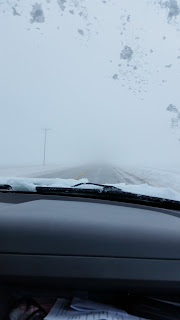